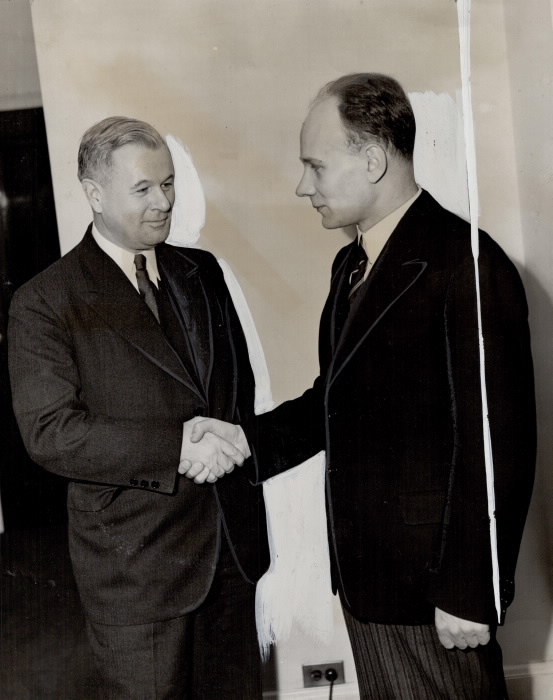 Canadian Ambassador to the Soviet Union, Dana L. Wilgress (on left), and Soviet Ambassador to Canada, Feodor Gusev (on right), meet in Toronto in 1942. Courtesy of Toronto Star Archives.

Canada often appears as little more than a footnote to studies of the shifting international order between world war and Cold War. As an emerging middle power, Canada neither played nor had any expectations of playing a central role in world affairs. With Britain in decline and the United State on the rise, Canada sought to reconcile its increasing autonomy with persistent hemispherical and ideological polarization. Nonetheless, Canada quietly crafted its own identity in international affairs, albeit always cognizant that the Canadian position would bear some relation to the policies of the United States and United Kingdom.

Relative to the historiography of British or American foreign policy in this era, the history of Canada’s early Cold War foreign policy is limited. This, in turn, might appear to indicate a lack of relevance and worth. This is not quite right, or not totally right. Part of it can be explained by the methods by which Canada practised its diplomacy in this period: by thoughtful and analytic observation. The Canadian Embassy in Kuibyshev, and later Moscow, sought to inform the Department of External Affairs (DEA) of what was happening in the Soviet Union, but also how other states approached the USSR.

It is well known that Canada maintained close relations with both the United States and the United Kingdom and was influenced by their respective Soviet policies. What this narrative implies, however, is that Canadian diplomats in Moscow blindly followed the dominant opinions propounded by their larger allies. The documents in this collection show that this is not the case. The Canadian dispatches from 1943-46, chiefly written by Dana L. Wilgress, demonstrate a distinct shift in policy recommendations throughout the period. Though initially opposed to the hardline American approach, when it came time to choose, the Canadians could no longer support their “firm yet fair” policy and instead had to join the “tough school.”[1] Though they were willing members of the Western camp, the Canadians were swept along with the commanding American current of Soviet policy as the Cold War took on a more tangible form.

Studies of Canadian early Cold War policy and foreign relations have generally neglected to answer how Canadian diplomats perceived US and British policies toward the Soviet Union, and how these in turn influenced Canadian interpretations and policy recommendations. The story of Canadian diplomatic circles in the early Cold War is rich and sheds light on Canada’s development as an international power in the 1940s.

The documents in this collection have been selected to demonstrate the shift in Canadian diplomats’ Soviet policy recommendations from 1943-46. The Canadian Embassy to the Soviet Union was established in Kuibyshev in 1943, headed by Dana L. Wilgress, Ambassador to the Soviet Union. From 1940-42, Canada relied on British documents to be informed of Soviet policy, and so there was little Canadian analysis on location in the Soviet Union in this period.[2] The most compelling documents of the collection are written by Wilgress, whose perceptive analyses and recommendations illuminate the shifting Canadian position on Soviet policy from 1943-46. Wilgress’ opinions were highly regarded in Ottawa,[3] and further, the DEA was virtually the only ministry that was well-informed about foreign policy.[4] Mackenzie King was focused on domestic policy,[5] and hence the Canadian Foreign Service in the Soviet Union was virtually the Canadian government’s only direct contact with the Soviets.[6] Primary documents are invaluable for understanding how Canadian diplomats in the field understood the nature of the unfolding conflict in relation to Canada’s increasing autonomy, restructured Anglo-American relations, and shifting Anglo-American perceptions and Soviet policy from 1943-46.

[6]Lawrence Aronsen and Martin Kitchen, The Origins of the Cold War in Comparative Perspective: American, British and Canadian Relations with the Soviet Union, 1941-48 (Basingstoke: Macmillan Press, 1988), 152.